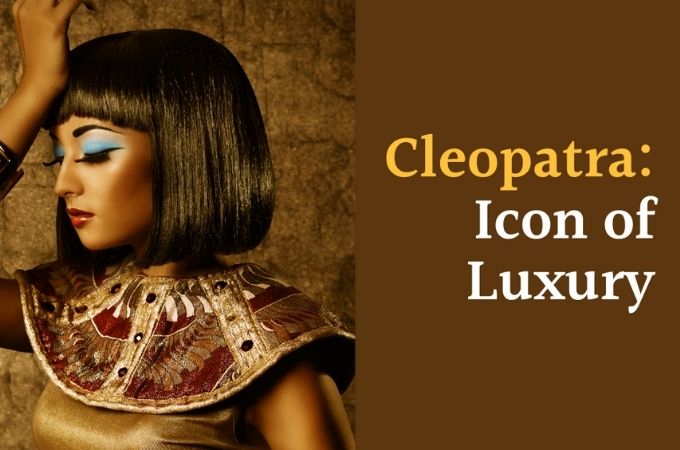 The last Egyptian pharaoh, Cleopatra, often affectionately called “Egypt’s last queen”, has been immortalized by the many historians, novelists and movie directors who have been enchanted by this extraordinary historical figure. She came to power in Egypt in 51 BC, at the age of only 17. As historical figure she exemplified charm, beauty and determination, and she has long been a renowned icon of luxury because of the widespread fascination with her sumptuous lifestyle. Cleopatra, who thought of herself as a goddess, is considered to be one of the wealthiest women to have ever lived and her net worth is estimated to have been around $ 95 billion.

One of Cleopatra’s signature luxury habits was that she famously bathed only in donkey’s milk. Ancient Egyptians were aware of the benefits of lactic acid for skin care. The lactic acid in milk helps cleanse the skin and release dead skin cells, allowing the skin to rejuvenate itself more quickly. Cleopatra used only milk, honey and lavender in her daily bathing routine to make sure that her skin always looked radiant. Rose petals floating on the water added to the aesthetic experience of her bath.

Cleopatra founded her own exclusive night club called “Inimitable Livers”, renowned for hosting only the most expensive drinking parties, during which she often flaunted her wealth. The historian Pliny recounts that at one dinner party she told Mark Anthony that she could host the most expensive dinner in history. During dinner, she dissolved a pearl earring that was worth 30 million sesteres – around $ 15 million – in a cup of vinegar and drank it, thereby consuming a fortune with one gulp. Cleopatra’s association with pearls is also one of the main reasons she came to be identified with luxuria even during her own lifetime.

Cleopatra was also a valiant entrepreneur. She set up her own perfume factory. She was a firm believer in fragrance as both a luxury cosmetic and an important tool of persuasion. Cleopatra famously doused her ship’s sails with perfume before sailing to her first date with Mark Antony to make sure that he smelled her long before seeing her.

She is also said to have travelled in style. The very ship with which she sailed to meet Mark Anthony was a golden barge adorned with purple sails and rowed by oars made of silver.

During her life she also became a fashion icon. Her exotic hairstyle and pearl jewellery became a fashion trend even in Rome, the capital of the empire at the time. Today, more than two thousand years after her death she remains one of the most recognizable historical icons of luxury. One of Egypt’s most famous and most popular luxury holiday resorts, located in the Sinai Peninsula, is named after her. The names of various luxury cosmetics such as fragrance oils, bath powders and perfumes also honour Egypt’s last pharaoh.

As a true royal she appreciated both the value and the utility of luxury, using it not only as a means to enjoying her life, but for achieving political goals as well. By virtue of her lifestyle, her successful political career and her entrepreneurial endeavours, she has gained a unique status as one of history’s most established and renowned icons of luxury.