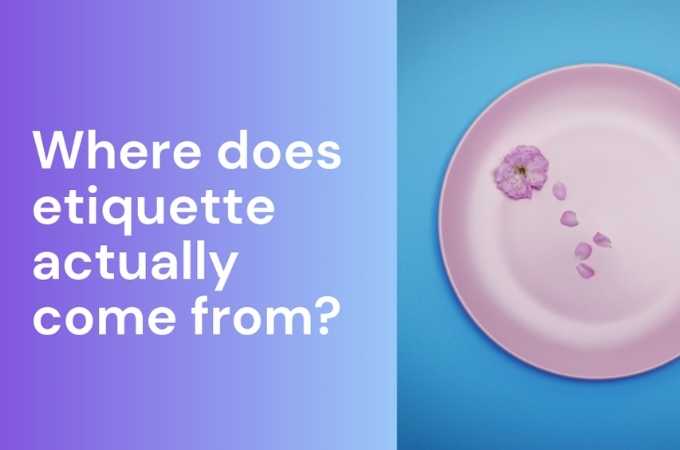 A brief history of etiquette

The etiquette of King Louis

Unlike manners, the history of which can be traced back to prehistorical times, the idea of etiquette finds its origins among the nobles in early modern France. Etiquette did not develop spontaneously like manners did, but were originally consciously developed as a set of written rules for social interaction in polite company.

In fact, the word ‘etiquette’ itself is derived from the French word for placard, meaning these rules were printed and posted. The education and sophistication of French nobles certainly played a role in their conscious creation of the conventional rules for etiquette, but some historians believe they were simply bored and looking for something to do with all their leisure time.

The king of France, Louis XIV (1638–1715) used this development to his advantage. He codified a set of rules for etiquette to solidify his political position and tame the French nobility which at the time threatened his status as supreme monarch. He would print little cards or “étiquettes” to remind palace visitors of the rules for appropriate behaviour.

For example, these cards stipulated where people were allowed to sit during dinners, dress codes etc. These rules for etiquette spread throughout Europe as dignitaries who visited the palace at Versailles became impressed with these social norms. The development of etiquette in 17th century Europe was really due to this politicisation of manners.

During the Age of Enlightenment – in the 18th century – etiquette was consciously adopted in order to signify one’s status among the cultural elite. In order to identify with this social elite, many members of the bourgeoisie adopted the behaviours and social norms of the upper class.

In America, both George Washington and Benjamin Franklin wrote codes of conduct or “rules of civility” aimed at establishing and propagating certain rules of etiquette in American society. By the 19th century, etiquette had come to include guidelines about how even children should behave to each other, to their teachers and to their parents as well as other adults.

Etiquette came to bear on every aspect of life and at the time included a number of rules and guidelines which, to the modern person, would be deemed rather absurd. In 1894 Robert Louis Stevenson even wrote an essay on the “Philosophy of Umbrellas” in which he argued for what he considered the proper use of umbrellas. The following year, Lady Constance Howard penned her “Etiquette of Dinners”, in which she argued that it was not appropriate to discuss politics, religion or even music or art during dinner parties. At the time – the late nineteenth century – common etiquette guidelines also included avoiding even smiling for too long.

One of the most notable contributions to the literature of etiquette is Emily Post’s 1922 book, “Etiquette – In Society, In Business, In Politics, In Home”. Through this work she achieved renown as the pioneer of modern etiquette.

In contemporary times, etiquette remains an important part of all cultures, but society has generally adopted a much more relaxed attitude towards etiquette than the strict and set attitudes that characterized its early history. In this regard manners and etiquette have become more intertwined, as etiquette has developed into an unwritten set of social conventions. Etiquette is certainly here to stay, however, and as is society is continually changing, it remains to be seen what the future of etiquette holds in store.