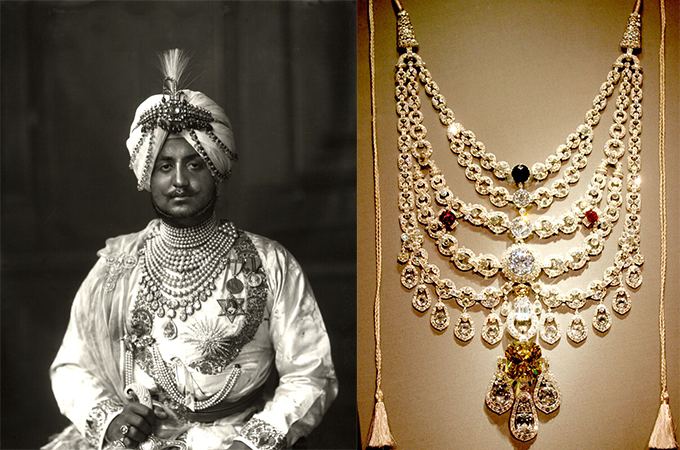 Maharaja Bhupinder Singh is perhaps best remembered around the world as a symbol of luxury.

The epitome of his legacy of luxury was undoubtedly his possession of the world-famous Patiala Necklace.

Bhupinder Singh (1891-1938) is not only one of India’s most famous Maharajas, but also a world-renowned symbol of luxury, and a most fascinating historical figure in his own right. At the tender age of 9, he succeeded his father as the Maharaja of the princely state of Patiala, located in the Punjab region. He would govern there from 1900 to 1938.

As a philanthropist he worked tirelessly for the betterment of the lives of the people of Patiala, where he introduced many social reforms. He also founded the state bank of Patiala in 1917 to foster growth in agriculture, trade and industry. His military service was exemplary: he served during the First World War as an Honorary Lieutenant-Colonel, and was promoted Honorary Major-General in 1918 and Honorary Lieutenant-General in 1931. He represented India at the League of Nations in 1925, and was chancellor of the Indian Chamber of Princes for 10 years between 1926 and 1938.

He was not only a renowned politician, but also a great cricket player. He captained the Indian cricket team and played 27 first-class cricket matches between 1915 and 1937, excelling as a batsman.

He married 10 times and fathered 88 children.

But despite being an avid politician, sportsman and having a massive family, he is perhaps best remembered around the world as a symbol of luxury. He was the very first person in India to own an aircraft, for example, and he had an airstrip especially built in Patiala for himself. When travelling by land, however, he would be driven in a motorcade of 20 Rolls Royce cars.

But the epitome of his legacy of luxury was undoubtedly his possession of the world-famous Patiala Necklace which was designed by the French luxury jewellery company, Cartier. A contemporary of Singh, king Edward VII, famously referred to Cartier as “the jeweller of kings and the king of jewellers”. Royal warrants were issued to Cartier not only by king Edward, but also by the royal courts of Spain, Portugal and Russia.

The famous “De Beers diamond”, the world’s seventh largest diamond was mined in South Africa in 1888, was bought by the Maharajah following its exhibition in Paris in the 1920s. In 1928, he commissioned Cartier to set the De Beers diamond as the centrepiece of a ceremonial necklace that became known as the Patiala Necklace. In its original form, the necklace contained 1000 carats in its 2,930 diamonds and other precious stones. It is considered to be one of the most expensive pieces of jewellery ever made and it is estimated that the necklace, in its original form, would be worth around £ 20 million today.

Sadly, within a decade after his death the crown jewels were sold off and necklace disappeared. It was last seen worn by the Maharaja’s son in 1946. More than half a century later, in 1998, the necklace was discovered in a second-hand jewellery shop in London by a Cartier associate, Eric Nussbaum. All the large stones were missing, though. Cartier then bought the necklace back and restored it using synthetic diamonds.

And the De Beers diamond itself? Well, it mysteriously and suddenly resurfaced again in 1982, when its anonymous owner put it up for auction at Sotheby’s auction in Geneva. Here the stone was purchased at US$ 3.16 million by an anonymous buyer – a price which was, however, apparently still far below its undisclosed reserve.