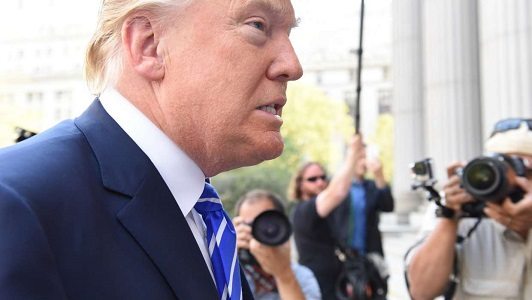 Donald John Trump, the man that Barack Obama has recently labelled “unfit” to be president of the US could potentially hold that very office on Tuesday November 8th 2016. We ask, how does a man who is widely reported to be brash, rude and more than a little economical with the truth, get to be a contender in the race to the White House?

Build your personal brand in the right way.

From a privileged upbringing where he learnt the property ropes from his father, Trump developed his empire and now has a Forbes estimated worth of $4.5 billion. Wharton graduate, three times married and developer of a clutch of real estate bearing his name, Trump is well known in the business world.

His personal brand has been further developed in the public eye through his television appearances in The Apprentice and on talk shows such as Larry King alongside the introduction of a clothing line and his books. Trump well understands the power of a personal brand, without it, he would unlikely be in the position he is in today. Yet, Forbes who create the World’s Billionaires List report on tussles with Trump over his estimated net worth, even fabrications, in his desire to bolster his economic worth and thus his overall brand value. The caveat is this, building a strong personal brand is important, but lies will hurt your brand in the long term.

Honesty is nothing without diplomacy:

In this age of political scandal following political scandal, that the public at large are less than enamoured with politicians is understandable: we just don’t believe what they say. And into this cultural context steps Trump who appears to have thrown away the rule book that dictates what one should and shouldn’t say when running for presidency (or indeed at all), and whose one time campaign manager Corey Lewandowski coined him the slogan ‘Let Donald Trump Be Donald Trump’.

Trump is the antithesis of careful. He says what he thinks without reserve, and actually, because this behaviour is at the opposite end to what we are used to in politics, it holds a certain shocking appeal. However, the difficulty with honesty that is not tempered with diplomacy is that you will offend a huge amount of people, as Trump has done of late through his remarks directed to the Khan family and in response to a baby crying whilst he made a speech in Virginia, saying: “I think she really believed me that I love having a baby crying whilst I’m speaking.” He may have been joking, he may have been being honest, but really these types of remarks are best left unsaid.

Confidence is good, self-aggrandising is not.

Perhaps one of Trump’s greatest appeals for his followers comes in his ability to ‘talk the talk’. In a speech of March 2016 Trump spoke of his 1986 book The Art of the Deal and his ability to do deals which would set him in strong stead as President, saying: “That’s what I do. I wrote The Art of the Deal…one of the all-time best-selling books about deals and deal-making.” Then, when talking about foreign policy in a speech of April 2016 Trump said: “I’m the only one—believe me, I know them all, I’m the only one who knows how to fix it.” Whilst in May 2016 he said: “Iran is a very big problem and will continue to be…I know how to deal with trouble. And believe me, that’s why I’m going to be elected president, folks.”

Confidence is a supremely desirable trait for leaders, it not only enables us to walk tall and have conviction in our abilities, but allows others to do the same. Unfortunately, when confidence brims over into over-confidence and self-aggrandising behaviour, the numbers clamouring for you to take a fall swell significantly.

Disagree if you must but do so with respect.

Politicians certainly seem to enjoy mud-slinging, it actually appears to be a vital aspect in any campaign strategy but Trump appears to take things to a whole new level. Trump regularly refers to his opponent as “Crooked Hillary” or even “CrookedH” utilising plentiful hashtags of #CrookedHillary on social media.

On the 22 June 2016 he declared that Hillary Clinton “may be the most corrupt person ever to seek the presidency” and criticised her speeches as “very long and very boring” on Twitter. And Clinton is not Trump’s only target. On the 2 August 2016 he was once more active on Twitter to pronounce President Obama as “perhaps the worst president in the history of the United States.” To disagree with opponents is normal but to denigrate them is counterproductive. Maintaining a respectful, dignified manner is paramount.

In many ways you can see how and why Trump has got to be a Presidential candidate, he is a respected and successful businessman who has built up a strong personal brand and in the current cultural and political climate he demonstrates some of the characteristics that people are clamouring for. Sadly, these characteristics verge to the extreme but whether the American public decree that they are too extreme remains to be seen. We will see you in November!

Paul Russell is co-founder and director of Luxury Academy London, www.luxuryacademy.co.uk, a multi-national private training company with offices in London, Delhi and Visakhapatnam. Luxury Academy London specialise in leadership, communication and business etiquette training for companies and private clients across a wide range of sectors. Prior to founding Luxury Academy London, Paul worked in senior leadership roles across Europe, United States, Middle East and Asia. A dynamic trainer and seminar leader, Paul has designed and taught courses, workshops and seminars worldwide on a wide variety of soft skills.