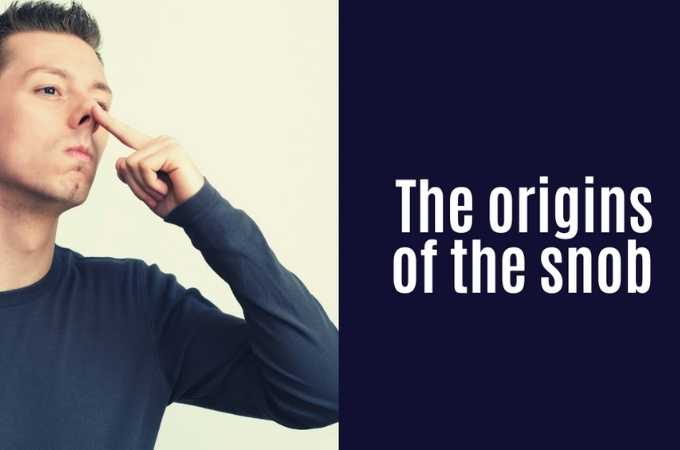 Technically speaking, most people are snobs

The snob was a cobbler?

The word ‘snob’ in the English language has undergone various changes in meaning over time. It originally signified a shoemaker or cobbler, but all this changed around the eighteenth century. By this time, certain posh English schools had so many children from aristocratic families, that the pupils with parents without titles had “s.nob” written behind their name. This is short for the Latin sine nobilitate, which literally means “not noble”.

As this abbreviation came to be used commonly during the nineteenth century, the word “snob” had come to mean “a person not belonging to the upper classes”. The word’s common usage and meaning thereafter underwent two more drastic changes. By the end of the nineteenth century the word was used to refer to someone who blatantly imitates and seeks to associate with those they regard as their superiors.

By the 20th century, however, it had also come to mean someone who is inclined to social exclusiveness and who tends to rebuff the advances of those they regard as their inferiors, i.e. a person who strongly believes in the correlation between social status and human worth. Consequently, the snob is someone who becomes obsessed with trying and attain worth by associating with those higher up the social ladder and shunning those lower down.

Snobbery, as it is known today, or some form of it would of course have been present in human society for most of our history. Writing in the first century of our calendar, the Roman philosopher Seneca, for example, compared snobbery to someone who buys a horse but only admires the saddle and bridle, not the animal itself. Thereby Seneca, himself actually one of the richest men in Rome at the time, argued that snobs were so consumed with status and wealth, that they remained oblivious to the true value and beauty of human life.

St. Paul, one of the first apostles of the early Christian church wrote in one of his Biblical letters that Christians are to avoid showing partiality against the poor, and the Greek phrase he used is nowadays often translated into English as “avoid snobbery”.

Nonetheless, this social attitude as we’ve come to know it in modern society has its origins in the transition period from medieval to modern society around the 17th century, when the traditional social structure of Western society radically changed. For centuries medieval society was characterized by unequal relationships between superiors and inferiors.

The modern era brought with it the democratization of social life, and consequently the middle class (or bourgeoisie) now gained the possibility to imitate and associate with the aristocracy. People from social backgrounds that would traditionally be considered part of the middle or even lower classes, often consciously started to adopt the customs, dress codes, manners, speech and lifestyle of the upper class in an attempt to climb the social ladder by virtue of this association.

A central part of their aspirations usually included strongly disassociating with anyone from the lower classes. Hence a snob has come to mean someone who on the one hand insists on displaying their status and wealth – whether it be real or apparent – while on the other hand strongly disassociating with and looking down on those the snob considers to be belonging to the lower classes.

This strong disassociation with the lower classes was historically not normally considered necessary by the aristocracy who were well-established in their social position, however. In this regard snobbery can be considered to be an expression of social insecurity by people who believe the value of human life is based on social status.