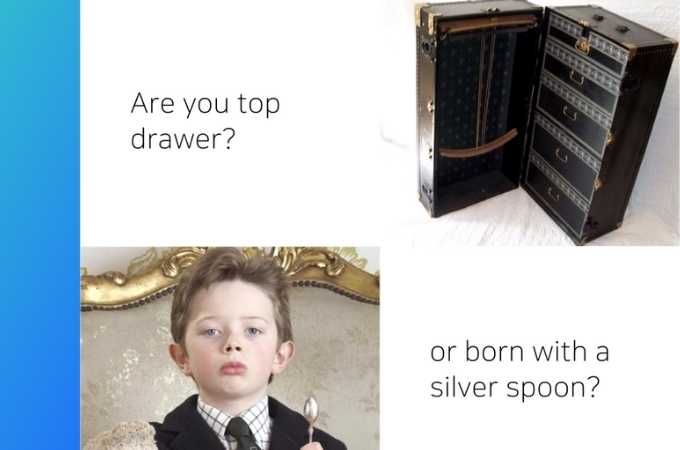 Fat Cat or born with a silver spoon?

what the Fat Cat wants

As speakers of English, we are blessed to be able to employ a number of creative phrases, some of which are commonly used and intended in a more positive sense than others, of course. The historical origins of such phrases are not only fascinating, but will help us understand and better employ our language.

Take the phrase “top drawer” for example. The phrase is commonly used to describe someone at the highest or top level, whether it be the highest level of excellence, expertise or, of course, wealth. This phrase derives from the old British expression “out of the top drawer,” which used to be a way to describe someone’s social status. The term is a reference to chests which have several drawers from top to bottom, and historically the more valuable things were kept at the top for easier access. Therefore, being the “top drawer” means having the highest value or worth.

The term “fat cat” has its origin on the other side of the Atlantic, in the America of the 1920s. Here it was used to describe rich political donors. Frank Kent, a journalist for the Baltimore Sun wrote the following in an essay for the magazine, American Mercury:

“The [political] machine has what the Fat Cat wants [i.e., public honour], and the Fat Cat has what the machine must have, … money.”
Unlike “top drawer”, when the term “fat cat” is nowadays commonly used to refer to the wealthy, it is often done so in a negative sense.

It has acquired the meaning of a greedy individual with “undeserved” wealth and as such the image is often used in editorial cartoons where a fat, cat-faced middle-aged man represents a corrupt banker, for example. One of the possible reasons why Kent chose the term, is because overweight cats tend to come across as exceptionally lazy.

The expression “born with a silver spoon in the mouth” also indicates inherited wealth, but without any inherently negative or positive connotations. The term originated from the fact that the aristocracy was the only part of the population able to afford silver eating utensils. Silver spoons in particular also used to be a fashion statement in itself.

In late medieval and early modern times, it was actually common for the upper-classes to carry around their own silver spoons in cases they would take with them wherever they went. The spoons would also often bear the crest of the owner upon its handle. The phrase, as it is commonly understood, first started to be commonly used in England in the eighteenth century.

Like so many expressions, the historical origins of the phrases we use to describe wealthy individuals have a very practical origin in that it referenced observable and well-known realities at the time. These realities often change over time, but thankfully for our beautiful language, these rich and valuable expressions remain.